Introduction to quantum computing: From classical to quantum (part I).

This is part of a (probably) long list of posts regarding quantum computing. In this post, we will take the leap from classical to quantum notions.

Disclaimer: while the material below might seem too simple for some scientists, I suggest not skimming over this post - personally, I always enjoy reading something that I believe I own, as επαναληψη μητηρ πασης μαθησεως (repetition is the mother of any knowledge)

A rough description of a quantum system

Let’s roughly say that a quantum system is a system (think of it as a computational unit), characterized by:

When we say quantum computing, we (very very very) roughly mean that:

Once again, this is a very rough description, based on my understanding so far. This might change as we progress more into the details.

1 This reminds me of an excellent saying/quote I read in a CS book: “Recipe for the best dragon soup: first, find a dragon…“.

The analogy with the dynamics of a graph

Here, following the book of Yanofsky and Mannucci, we make the analogy between a quantum system and the evolution of a Markov chain in action over a graph. 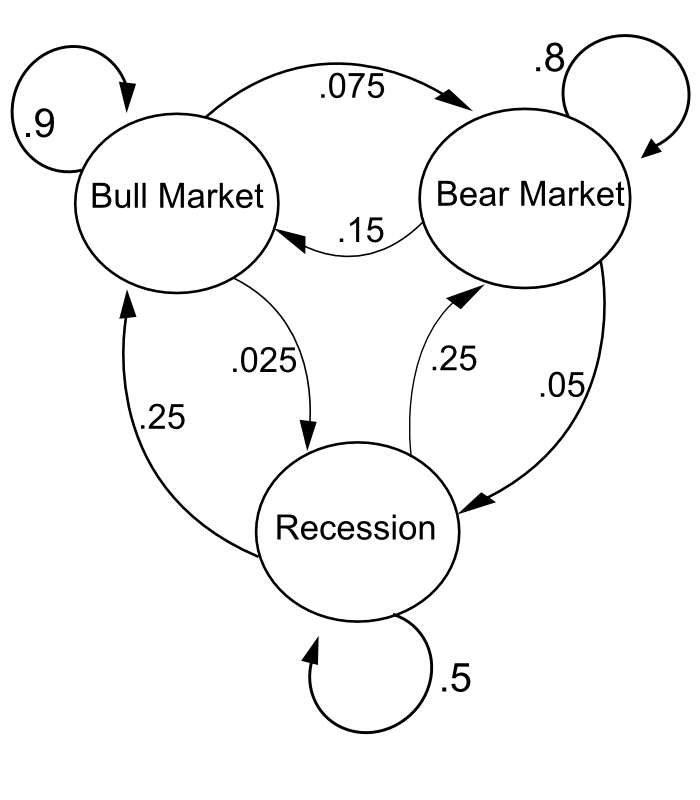 The states represent whether a hypothetical stock market is exhibiting a bull market, bear market, or stagnant market trend during a given week. According to the figure, a bull week is followed by another bull week 90% of the time, a bear week 7.5% of the time, and a stagnant week the other 2.5% of the time.

One can represent the “system” through the matrix of transitions.

I.e., with probability 0.8 we will have another bear week, etc.

If we would like to see what happens to the week after that, we re-apply the above rule.

In both cases, the application of the transition matrix is represented as a matrix-vector multiplication; using $\mathbf{P}$ as a basic operation, it is possible to calculate, for example, the long-term fraction of weeks during which the market is stagnant, or the average number of weeks it will take to go from a stagnant to a bull market.

Let us now make the analogy with the rough description of a quantum system we provided above: the initial state of a quantum system is something like $\mathbf{x}_0$ above, the operations/computations are the transition matrices $\mathbf{P}$ (we will see that in quantum systems we have a collection of operations we can apply), and the final outcome is the outcome after applying a series of matrix-vector products to the original state.

Further, the use of a stochastic graph (i.e., going from one state to another is not a deterministic fact; it depends on the probability of selecting paths from the current state to the next) is perfect for the analogy of the inherent indeterminacy in our knowledge of a physical quantum state.

Let’s see how this differs in an abstract sense. Again, we are far from describing a real quantum machine, so whatever we discuss below sound… vacuous. Assume $x_i = 1/3$ represent a probability; i.e., the probability of the event $x_i$ is $1/3$. Let also $x_j$ be another event with probability $1/5$. Observe that these numbers are in $[0, 1]$ and can be, for instance, entries of a state in a graph. An obvious but critical observation is that the probability of either events $x_i, x_j$ is the addition of the individual probabilities $x_i + x_j = 8/15$. The following two obvious rules naturally apply:

You might wonder: “this is one of the most obvious thing I’ve ever read”. And I agree with you.

Consider a graph with 3 nodes and a transition matrix as follows:

Observe that the sum of the modulus squares of $y$ is 1.

Some properties of the unitary transformation matrices:

The take-home message is that dealing problems with complex numbers probably requires a different approach from us. Since quantum systems and computing is inherently complex-based, we need to be aware of these differences.

In the second part of this post, we will describe the double-slit experiment that, $(i)$ summarizes the above information in a toy example, and $(ii)$ describes the connection between classical and quantum states and transitions.